The Luftwaffe’s struggle against the Allied bomber offensive
A book review. 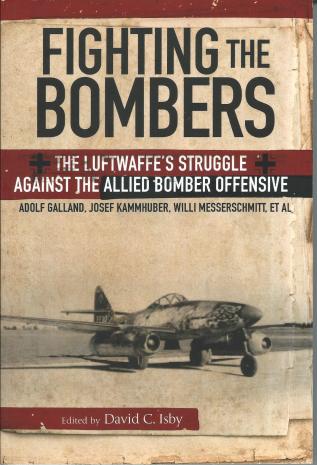 This book dismisses any possible doubt one might have about the German habit of “gründlichkeit” (thoroughness). A series of 18 interrogations / interviews with Luftwaffe top-commanders, like Adolf Galland (Luftwaffe fighter-ace with 103 victories), Josef Kammhuber (architect of the “Kammhuber-line”), Wolfgang Martini (architect of the Luftwaffe radar and communications network), as well as Willy Messershmitt (designer of the lethal Me-262, the world’s first operational jet fighter) give the reader an extraordinary detailed view of the German air defences during the 1940 – 1945 timeframe and the development of equipment, strategy and tactics. It also provides a rare insight in the German struggle to stay abreast of the rapid Allied technological advances.

The book is structured into five chapters: 1: “The defence of the Reich”, deals with the organization of the air defences; 2: “A battle of increasing numbers and technology”, gives a very detailed overview of the applied procedures and techniques to cope with the growing Allied bomber threat; 3: “Developing technology to defend the Reich”, deals with radar as well as aircraft development, notably the Me-262; 4: “Applying the technology”, describes the problems of command and control in a rapidly changing environment.

The final chapter, 5, is more like an epilogue; in 16 short paragraphs, General Major Hans-Detlef Herhuth von Roden (Chief, Historical Section Luftwaffe High-Command), sums up the reasons why the air defences of the Reich failed. The first of his conclusions “… the German armed forces thought only in an offensive vein (…) of the overall conduct of the war…” sums up the basic strategic flaw in German military thinking at that time.

A wealth of statistical information and diagrams lifts this collection of interviews almost into the “Textbook” category. I recommend this book to all of you who are seriously interested in German WW2 (night) fighter operations and looking for hard, factual data combined with operational experiences.

Thank you for visiting my blog! The posts you find here are a direct result of my research into aviation and military history. I use the information I gather as a foundation and background for my books. You may call the genre historical fiction, a story woven into a background of solid and verifiable historical facts. However, the period and region I have chosen to write about (late 1930's - 1950's in South-East Asia) are jam-packed with interesting information and anecdotes. If I'd used them all I would swamp the stories. So this blog is the next best thing. It is an "overflow area" in which I can publish whatever I think will interest you. And from the reactions I get, I deduce I am on the right track. A lot will be about aviation in the former Dutch East Indies. This, because my series of books ("The Java Gold") follows a young Dutch pilot in his struggle to survive the Pacific War and its aftermath. But there's more in the world and you'll find descriptions of cities, naval operations and what not published on this blog. Something about myself; I am a Dutch-Canadian author, living in, and working out of the magical city of Amsterdam. My lifelong interest in history and aviation, especially WW2, has led me to write articles and books on these subjects. I hope you'll enjoy them!
View all posts by Kingsleyr →
This entry was posted in WW2 Europe and tagged Adolf Galland, Allied bombers WW2, Bomber offensive WW2, German air defense WW2, German night-fighters, German Radar WW2, Josef Kammhuber, Luftwaffe history, Luftwaffe night-fighters, Luftwaffe WW2, Me-262, Me-262 night-fighter, Willy Messerschmitt, Wolfgang Martini. Bookmark the permalink.

6 Responses to Fighting the Bombers!