Project “X”, the 7th Bomb Group and Problems of Command

When President Roosevelt learned of the FEAF’s massive losses on December 8, he immediately issued a Presidential directive to reinforce the Philippines. As a result, a total of 15 Consolidated LB-30’s and 65 Boeing B-17E’s would be sent off in a hurry to the South-West Pacific. The ferry project had been given the ominous sounding name ‘Project X’. And the ‘Straubel Detachment’ consisting of 15 bomber crews of the 7th Bomb Group under Major Austin A. Straubel, was chosen to deliver the first installment. As we have seen, Straubel and his crews spearheaded a steady trickle of ‘Project X’ bombers that kept arriving singly or in pairs or even trio’s via the African Route.

The strength of the 7th Bomb Group gradually built up as more planes trickled in to Java over the next few weeks. On January 16, it was up to four LB-30s and six B-17s, all of them flown in via the African Route by crews from the 9th, 11th and 22nd bomb squadrons. And during the next weeks, more crews of the 9th, 11th and what remained of the 22nd Bomb or the 88th Reconnaissance Squadron would make their way to Java so that, by February 1, 1942, fifteen B-17E’s and four LB-30’s had reached Java.
However, this build-up soon created serious problems.

The continuing influx of bombers severely strained Singosari’s limited space and facilities. And then there was the spares situation or, putting it more bluntly, the general lack of everything. The crews of the 7th Bomb Group grew extremely possessive of their supplies, tools and rations.
By the end of January 1942, the condition of the planes in both bomb groups was becoming a major problem. The older bombers were rapidly wearing out as a result of the persistent very heavy use and frequent battle damage. And when some of the newer ones arrived, they were badly in need of an overhaul after their 12,000-mile ferry flight. The unfamiliar LB-30 complicated the maintenance problems. It had its own peculiar problems for the mechanics to fix and its specialized spares added complexity to the already difficult logistics situation. 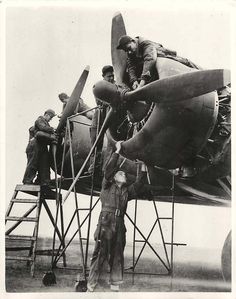 USAAF Mechanics servicing a B17 ‘in the open’

On top of this came the overcrowding; the few mechanics servicing the increasing number of 7th Bomb Group planes at Singosari had to share a single large hangar with the Dutch (who still had some of their antiquated B-10’s in there), as well as with mechanics of the 19th Bomb Group, who were trying to patch up their bullet riddled B-17’s. A lot of work had to be done outside.
There was not nearly enough ground crew; helped by the combat crews wherever they could, the few trained mechanics present worked very hard during very long hours and on very little food.

They had to work with tools both inadequate for the job and insufficient in number. There were almost no spare parts; those with which the planes had left the United States had all too often been used up along the way.
It is a tribute to the dedication of these men that they kept the bombers flying, despite the fact that they quite frequently went without sleep. Their living conditions in Yogyakarta were a Spartan minimal to say the least, quartered as they were in an old monastery. And it was hard to find any western-style food or recreation during their scarce off-duty hours in a city where the population was 90% native Indonesian and predominantly Muslim.
Ever mindful of what had happened at Clark Field, the Philippine veterans were worried about this dangerous concentration of all American bombers at one field. The latter argument made good sense and, after a brief site inspection, it was decided to move the7th Bomb Group to Yogyakarta, 150 miles west of Malang. The first of the 7th’s ground crews arrived at Yogyakarta on January 21 and from then on, the bombers of the 7th re-deployed in groups of two and three to their new ‘official base’. But the field was a disappointment after Singosari; it was still being enlarged and its two way grass runway became very soft in tropical rains. And it rained each afternoon.

But the airfield and maintenance difficulties were nothing compared to the problems of command. What befuddled the local situation right from the start was that Major Austin A. Straubel and Lt. Col. Eugene Eubank didn’t see eye to eye. Straubel was – at that time – the 7th Bomb Group’s ranking officer and CO of the 11th Bomb Squadron’s Java detachment. Eubank not only commanded the 19th Bomb Group but also was CO of 5th Bomber Command. Soon the question arose whether or not the crews of the 7th Bomb Group were part of and subordinate to 5th Bomber Command.

This situation was exacerbated further by the attitude of Eubank and the rest of his 19th Bomb Group, whose ‘up nosed’ air of superiority soon irritated all ‘newcomers’ and caused friction right from the start.
It was not a good beginning of what turned out to be the first American bomber offensive of the war.

Thank you for visiting my blog! The posts you find here are a direct result of my research into aviation and military history. I use the information I gather as a foundation and background for my books. You may call the genre historical fiction, a story woven into a background of solid and verifiable historical facts. However, the period and region I have chosen to write about (late 1930's - 1950's in South-East Asia) are jam-packed with interesting information and anecdotes. If I'd used them all I would swamp the stories. So this blog is the next best thing. It is an "overflow area" in which I can publish whatever I think will interest you. And from the reactions I get, I deduce I am on the right track. A lot will be about aviation in the former Dutch East Indies. This, because my series of books ("The Java Gold") follows a young Dutch pilot in his struggle to survive the Pacific War and its aftermath. But there's more in the world and you'll find descriptions of cities, naval operations and what not published on this blog. Something about myself; I am a Dutch-Canadian author, living in, and working out of the magical city of Amsterdam. My lifelong interest in history and aviation, especially WW2, has led me to write articles and books on these subjects. I hope you'll enjoy them!
View all posts by Kingsleyr →
This entry was posted in Dutch East Indies, Java Campaign 1942, Pacific War, US Army in Java 1941, USAAF in Australia, USAAF Java, USAAF Pacific, WW2 Pacific and tagged 19th Bomb Group in Java, 7th Bomb Group in Java, African Ferry Route 1942, Java Campaign WW2, Major Austin A. Straubel, Project X 1942, US Forces in Java 1942, US Forces in NEI, USAAF B17 in Java, USAAF in Java, USAAF LB-30's in Java. Bookmark the permalink.