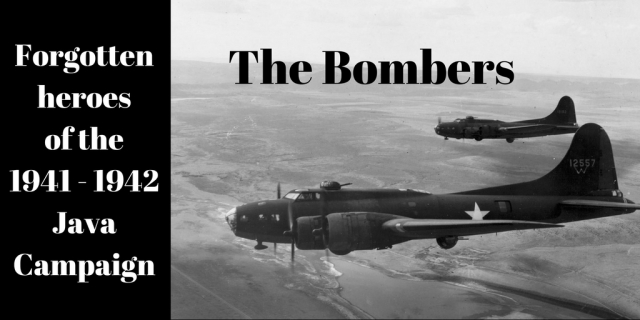 Hitting the Philippines – from Java

On January 8, 1942, the seemingly indefatigable Combs took nine of the B-17’s to Kendari II (also known as K2) at 07.15 a.m. They arrived 11.30 a.m. and took off at 17.00 p.m. the same day on a second mission against Japanese shipping in Davao Gulf.
Mechanical difficulties plagued the flight; four of the nine B17’s had to abort. The remaining five succeeded in reaching the target area and, as they had to attack in poor visibility, their bombing runs brought only uncertain results (1). The crews returned to K2 and stayed there overnight; next day, January 9, they fixed their mechanical difficulties and on January 10 at 07.00 a.m. they took off for the return flight to Singosari.

At that same January 10, the Japanese Empire officially declared war on the Kingdom of the Netherlands. Only hours later, a Dutch Navy Dornier Do-24K spotted a Japanese invasion fleet heading for Tarakan Island and Northeast Borneo. Knowing Dutch forces would not be able to prevent a Japanese landing, Dutch Army HQ immediately ordered the destruction of the Tarakan Djuata oil fields, the Royal Dutch Shell refinery and the coal mines in Borneo’s Berau Valley.

In response to a request for US help to attack the invasion fleet off the Tarakan coast, 7 B-17’s took off from Singosari on January 11 at 05.55 a.m. and headed north-north west in terrible weather. Four of the bombers lost formation and made it back to Singosari around noon. The three remaining B-17’s (2) attacked the fleet while fighting off Japanese fighters and bombed with uncertain results – 2 probable and 2 possible hits on transports and / or cruisers.

Combs made it back to Singosari around 16.35, Conelly diverted to Samarinda II and returned to Singosari on January 12 and Kurtz diverted to Surabaya, landing around 17.00. B-17 gunners claimed two Japanese fighters shot down during the encounter.

Thank you for visiting my blog! The posts you find here are a direct result of my research into aviation and military history. I use the information I gather as a foundation and background for my books. You may call the genre historical fiction, a story woven into a background of solid and verifiable historical facts. However, the period and region I have chosen to write about (late 1930's - 1950's in South-East Asia) are jam-packed with interesting information and anecdotes. If I'd used them all I would swamp the stories. So this blog is the next best thing. It is an "overflow area" in which I can publish whatever I think will interest you. And from the reactions I get, I deduce I am on the right track. A lot will be about aviation in the former Dutch East Indies. This, because my series of books ("The Java Gold") follows a young Dutch pilot in his struggle to survive the Pacific War and its aftermath. But there's more in the world and you'll find descriptions of cities, naval operations and what not published on this blog. Something about myself; I am a Dutch-Canadian author, living in, and working out of the magical city of Amsterdam. My lifelong interest in history and aviation, especially WW2, has led me to write articles and books on these subjects. I hope you'll enjoy them!
View all posts by Kingsleyr →
This entry was posted in Aircraft, Dutch East Indies, Pacific War, USAAF in Australia, USAAF Java, USAAF Pacific, WW2 Pacific and tagged 19th Bomb Group in Australia, 19th Bomb Group in Java, USAAF 1942, USAAF B17 in Java, USAAF B17's Philippines, USAAF in Java. Bookmark the permalink.