The Clark Field Disaster and Retreat from the Philippines

Brereton’s impression that the organization of the FEAF left much to be desired was confirmed the next day, after a hurried inspection tour of his command. The November 5 entry in his diary reveals that his orders, to build up a functioning air force in no-time, were literally a mammoth task.

‘…The heavies and mediums were all based at Clark Field. Half the fighters were stationed at Nichols Field, the remainder at Clark Field. There were no anti-aircraft defenses available at either of these fields or at any other airfield in the Philippines. Additional landing fields at Iba and Del Carmen were under construction. The air depot at Nichols Field was completely inadequate and plans for expansion to care for enormous increase in the Air Forces had not been implemented. Most of the B-17s were still uncamouflaged and from the air their burnished bright metal could be seen from a distance of at least 25 miles. There were no spare parts of any kind for P-40’s, nor was there so much as an extra washer or nut for a Flying Fortress. Training flights had to be limited as there wasn’t a spare engine for either P-40’s or B-17’s. There were few tools of any kind available with which an advance depot could begin rudimentary repair and maintenance…’

General Marshall sent out a ‘War Warning’ to his commanders on November 28, 1941. It heralded the last days of peace in the Philippines. A sense of foreboding had descended over the islands; everybody was convinced that ‘something’ was going to happen soon; the only question was – when?

On December 2, a PBY-4 piloted by Lt. Robinson and Ensign Burgess stumbled upon a concentration of 20 Japanese ships in Cam Ranh Bay on the Indo-China (Vietnamese) coast. On December 3, another PBY reported that their number had grown to 50 and now included cruisers and destroyers.

When PatWing 10 returned the next day, they found Cam Ranh Bay empty of Japanese shipping and neither they nor the B-17’s were able to find them again.
From then on, Japanese aircraft were over Luzon every night and as a precautionary measure against a surprise attack, the 14th and 93rd bomb squadrons flew their B-17s to Del Monte, Mindanao, on December 5. Unfortunately, re-deployment of the 28th and 30th squadrons to Mindanao was not carried out.

MacArthur and Sutherland in Corregidor

Major General Brereton received the news of the Japanese attack on Pearl Harbor on December 8 at 04.00 a.m. He ordered all air units in the Philippines to prepare for an expected Japanese air-attack at daybreak. He hurried over to General Douglas MacArthur’s headquarters at Fort Santiago, Manila and arrived around 5 a.m. but was categorically denied access to MacArthur.

Despite frequent visits and telephone calls, MacArthur’s Chief of Staff Major General Richard K. Sutherland refused the desperately needed permission to carry out a planned strike at the Formosa (Taiwan) airfields. Afraid of his units being caught on the ground – as had happened in Hawaii – Brereton ordered the B-17’s from Clark into the air without bombs. Two fighter squadrons were ordered to Cover Clark Field and the Manila area.
When MacArthur’s approval for the Formosa strikes was finally received around 11.30 a.m., the orbiting bombers and fighters were recalled. The bombers were to re-fuel and bomb-up, the fighters to refuel. They were practically all on the ground at Clark Field when the Imperial Japanese Navy’s 11th Air Fleet struck at 12.15 p.m. with a force of 54 G-3M ‘Nell’ bombers and 50 A6M Zero fighters.
They dropped a lethal pattern of 600 lb bombs that ruined the single runway, destroyed some of the parked planes and devastated buildings, hangars and workshops. But the strafing attacks by the Zeroes were fatal to the B-17’s. For what seemed an eternity – but in reality 45 minutes – the strafers went after any airplane and any person in sight. The fully fuelled and bombed-up bombers exploded in angry fireballs, the remaining fighters were shredded by machine gun and 20 mm cannon fire. 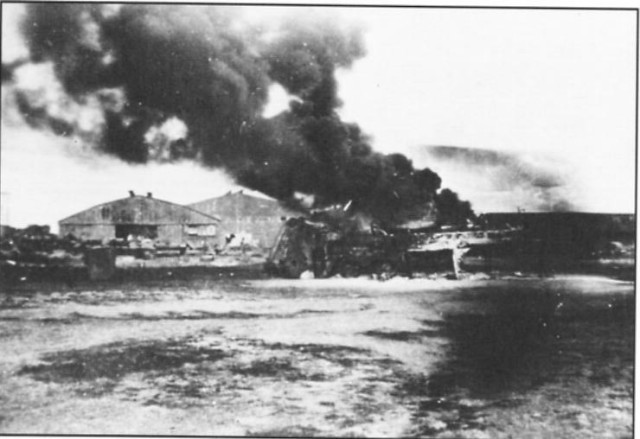 On this first day of the war, he FEAF had suffered staggering losses. In a single stroke, 18 of its precious B-17’s had been destroyed, together with 53 P-40’s, 3 P-35’s and an additional 25 or 30 miscellaneous aircraft (B-10’s, B-18’s, and observation planes). At Clark Field alone, over 100 persons were killed and 250 military personnel were wounded. Only two or three badly damaged B-17’s could later be patched up so that they could fly out to Del Monte, but only one of them would ever fly on an operation.
The 14th and 93rd flew their B-17’s to Luzon on December 9; 7 of them went to the San Marcelino dispersal field, 6 landed at Clark where the runway had hastily been patched up. After refueling in a hurry, they took off again and stayed aloft until darkness came.
Next day, December 10, saw the first Japanese invasion of the Philippines, with 4000 troops landing at beaches near Vigan and Aparri in northern Luzon. A flight of 5 B-17’s of the 93rd Bomb Squadron hastily took off from Clark and attacked the Japanese fleet with 100lb bombs that did some damage. Their bombs dropped, they went back to Clark to refuel and were ordered to return to Del Monte 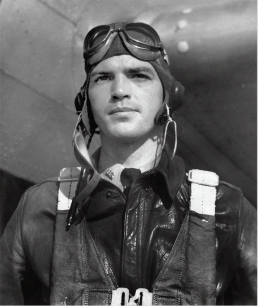 Major O’Donnell, Captains Kelly and Parsel, Lieutenants Schaetzel and Montgomery, all of the 14th Bomb Squadron, flew their B-17’s from San Marcelino to Clark to bomb up. Kelly and Schaetzel had orders to find a Japanese carrier, which of course they did not find.
They turned to Vigan and Aparri and harassed the shipping there with 600lb bombs. Several transports were damaged and Kelly was credited with having sunk the battleship Haruna.
It later turned out that he had damaged the cruiser Ashigari,  the Haruna being 2000 miles away at that moment.

After the attack, the B-17’s had to fight off very aggressive Zero attacks. A couple of Zeroes shadowed Captain Kelly’s B-17 and shot the bomber down within sight of Clark Field, killing Captain Kelly and his radio operator Sgt. Delehanty.
Because there were swarms of Japanese fighters over Clark by now, the returning B-17’s, together with the 3 remaining at San Marcelino, were ordered back to Del Monte. A single B-17 piloted by Lt. Pease flew the last bombing mission of that day against the Japanese ships off Aparri. He made 4 runs and dropped 19 100lb demolition bombs and all he got for his troubles was a single near-miss. After this last raid, Brereton ordered all B-17’s still in Luzon to return to Del Monte on December 11. On December 12, Major Combs took off from Del Monte for the only B-17 mission that day against the Japanese at Vigan but no results were observed.
Next day, the morning of December 13  two B-17’s, piloted by Lts. Bohnaker and Smith, were sent out to see what was cooking off Legaspi in southern Luzon where  a Japanese invasion fleet had been reported. But they had strict orders “… not to bomb or alert any enemy shipping there…” 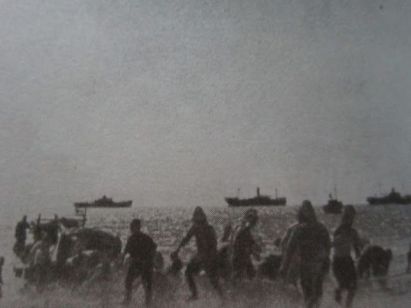 On December 14, the last significant B-17 operation from the Philippines was carried out, an attack on the Japanese fleet off Legaspi. Of the 6 B-17’s detailed for this mission, Lt. Conolly’s plane did not get airborne and Lts. Goates and Ford had to abort their missions because of engine trouble. The three remaining bombers, piloted by Lts Wheeless, Adams and Vandevanter, reached the target and carried out the attack but they only scored some near misses and no hits.
Vandevanter bombed from 21.000 feet and, after ducking into a bad weather front,  returned unmolested but the other two were fiercely counterattacked.
Bullets from 18 Japanese fighters tore through Wheeless’ B-17, wounding all 4 gunners and mortally hurting Pfc. Killin. Wheeless nursed his battered ship back to Mindanao but as drizzling rain shut out Del Monte field, he had to crash-land his B-17 at a small barricaded field at Cagayen where the crew counted 1200 bullet holes in their ship.
Adams was continuously attacked by Japanese fighters from the moment he entered the target area. Japanese bullets riddled his plane and wounded several crew members. They knocked out two engines and as he lost height rapidly, he knew he would not make it back to base at Del Monte. He decided to head for the island of Masbate, just across the strait from Legaspi. After crash-landing the B-17 at the beach, Adams and his crew barely had time to race for cover before the strafing Zeroes arrived and completely destroyed the bomber. Once the strafers had left, the men had to make it back to base on foot, a journey that would take them three weeks… 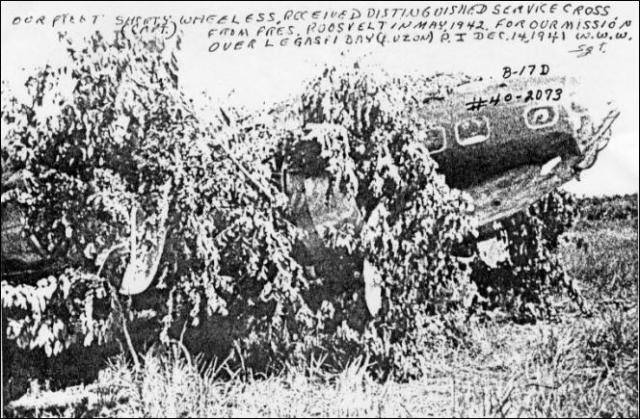 Wheeless B-17D 40-2073, camouflaged after its crash-landing at Cagayen

The high mechanical failure rate of this mission made it clear that, with the facilities at Clark and Nichols fields completely destroyed, the B-17’s could no longer be maintained in the Philippines. Moreover, those in command realized that it was only a question of time before the Japanese would locate the hitherto undiscovered Del Monte Field. Therefore, on December 15, MacArthur approved Brereton’s proposal to move the remaining B-17’s from Del Monte to Darwin (Australia).
The first flight of 6 B-17’s left for Darwin on December 17 but the next flight on the 18th escaped destruction by a hairbreadth. 4 B-17’s were ready for a take-off at dusk, still dispersed and camouflaged with coconut leaves while waiting for 3 B-18’s to come in. The B-18’s – one of them carrying General Clagett – had barely landed when 12 Zeroes came roaring in over the tree-tops. They had followed the B-18’s in and as they strafed the field, their guns and cannon turned them into flaming wrecks. But the camouflaged B-17’s escaped unhurt and three of them left for Australia as soon as the coast was clear. General Clagett followed on the 19th as a passenger in a single B-17.
The final flight of 4 B-17’s departed the Philippines for Darwin in Australia on December 20, not even two weeks after the war had started. There, 1600 miles to the south, the only offensive weapon remaining in American hands could be properly maintained, safe from surprise attacks…

Thank you for visiting my blog! The posts you find here are a direct result of my research into aviation and military history. I use the information I gather as a foundation and background for my books. You may call the genre historical fiction, a story woven into a background of solid and verifiable historical facts. However, the period and region I have chosen to write about (late 1930's - 1950's in South-East Asia) are jam-packed with interesting information and anecdotes. If I'd used them all I would swamp the stories. So this blog is the next best thing. It is an "overflow area" in which I can publish whatever I think will interest you. And from the reactions I get, I deduce I am on the right track. A lot will be about aviation in the former Dutch East Indies. This, because my series of books ("The Java Gold") follows a young Dutch pilot in his struggle to survive the Pacific War and its aftermath. But there's more in the world and you'll find descriptions of cities, naval operations and what not published on this blog. Something about myself; I am a Dutch-Canadian author, living in, and working out of the magical city of Amsterdam. My lifelong interest in history and aviation, especially WW2, has led me to write articles and books on these subjects. I hope you'll enjoy them!
View all posts by Kingsleyr →
This entry was posted in Australia in WW2 and later, Dutch East Indies, Java Campaign 1942, Pacific War, USAAF in Australia, USAAF Java, USAAF Pacific, WW2 Pacific and tagged 11th Air Fleet Japanse Navy, 19th Bomb Group 1942, 19th Bomb Group Australia, 19th Bomb Group on Clark Field, 19th Bomb Group Philippines, B-17's in Java, B-17s in the Philippines, Captain Colin Kelly, Del Monte Field 1941, FEAF, FEAF Philippines, General MacArthur, Maj. Gen Lewis H. Brereton, USAAF in Java, USAAF in the Philippines, Vigan Aparri Invasion 1941. Bookmark the permalink.