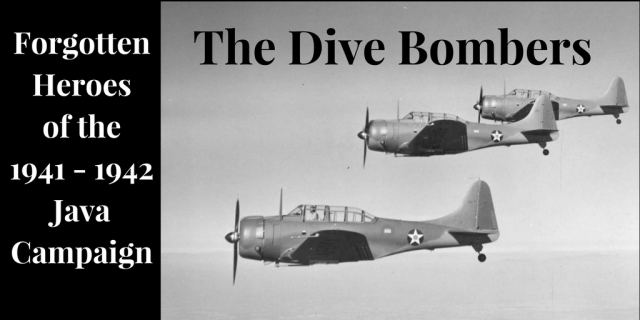 One Way Ticket To Java

January 1942 was a very hectic month for the men of the 27th. It was a tough job to get the hastily crated A-24’s back into flying condition; shipped off in a hurry, some of them were still caked in Louisiana mud.

Armaments officer Zeke Summers ran around cursing, because most of the essential components, such as trigger motors, solenoids, gun-mounts and sights, were missing. To make matters worse, most of the Wright R1820-32 radial engines badly needed a complete overhaul; on some of them, the compression was so low that one could easily turn the prop with one hand…

Somehow, most of the obstacles were overcome – albeit with incredible improvisations and a lot of help from the RAAF. In January 1942, three squadrons were formed; the 91st at Archerfield under Captain Ed Backus, the 16th and 17th at Amberley under Captains “Buck” Rogers, and Herman “Snake” Lowery.
As news from the Philippines and the Dutch East Indies became worse and worse, all airworthy planes were pressed into a relentless training cycle to give the crews at least some practice in dive-bombing and strafing before going into action. They also were given ‘classroom’ lectures and Lt. Lee Alverson liked Harry Galusha’s daily lectures on low flying or ‘buzzing’ so much that he decided to give the summer resort of Southport a proper first class buzz on January 29. He put on a truly impressive show but as he skimmed the sea, his prop unfortunately hit a wave and he had to crash land his A-24 (41-15809) on the beach in front of a crowd of astonished spectators.

Then the 91st received its movement orders and on February 5th, Captain ‘Ed’ Backus and the first flight of A-24’s took off in the pouring rain. They turned north-west on the first leg of the 1975 mile trip to Darwin, duplicating the track of the P-40 squadrons via Charleville, Cloncurry, and Daly Waters. On February 6th, Lt. Harry Galusha followed with the rest of the squadron and by February 8th, fourteen of the fifteen A-24’s had arrived at Darwin.
This long flight in bad weather had been rough on the worn engines of the A-24’s. 41-15809, flown by the unfortunate Lt. Alverson and his gunner Sgt. Gaydes, had been left behind with severe engine trouble at the end of the first 425 mile leg to Charleville. Salvatore’s plane (41-15806) was grounded with an oil leak and Jacob’s A-24 (41-15794) had an engine with three bad cylinders. It was decided that Salvatore and Jacobs would stay at Darwin to repair their planes while the rest of the squadron pressed on to Java.
On February 9th a flight of 9 Curtiss P-40E fighters of the 3rd Pursuit Squadron (provisional), led by a LB-30 ‘Liberator’, took off for Kupang on Timor. Three A-24’S, flown by Captain Ed Backus, Lt. Abel and Lt. Criswell followed in their wake. The A-24’s with their worn-out engines could not keep up with the fighters and they were soon left behind. The LB30 however got lost over Timor, the fighters ran out of gas and 8 P-40’s had to crash-land wherever they could, killing one pilot.
(See: USAAF P-40’s in Java – Part Five). 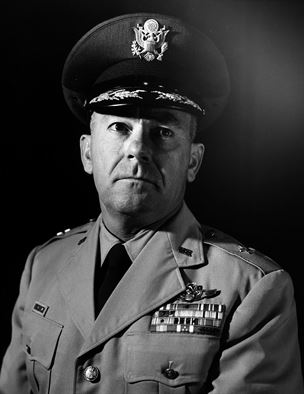 Captain ‘Ed’ Backus, seen here as a Brigadier General. He retired from the USAF on August 1, 1961 as Major General.

Of course, Backus, who had flown the PanAm Portugal Clipper route for seven years, had no problem to find his destination, despite the very bad weather. But when the three A-24’s suddenly arrived over Kupang, without any announcement, the Australian AA guns put up a fierce barrage. They punctured the gasoline tank on Backus’s plane, neatly removed the stabilizer on his right elevator and did extensive damage to the other planes. The Aussies apologized to the pilots with lots of beer and patched up Backus’ plane so he could fly on to Pasirian in Java the next day. But Abel and Criswell had to return to Darwin to have their badly shot-up planes repaired.
The repairs were done quickly and they were able to join the remaining 9 A-24’s of the 91st on February 11th taking off for Timor.

Guided by a LB-30 they flew straight into a stationary storm front and for large parts of the 530 mile flight they were forced to fly as low as 50 feet above the shark-infested waters of the Timor Sea. Everybody sighed with relief when they reached Kupang. The squadron took off again at dawn on February 12th. Six pilots (Summer, Launder, Smith, Ferguson, Abel and Criswell) headed for Den Pasar on Bali, five others (Galusha, Larronde, Tubb, Hambaugh, and Haines) decided to stage through Maingapore on Sumba where Haines cracked a couple of ribs when he hit a couple of mudholes and ground-looped his A-24. The plane was put back on its wheels with the help of the local population and three hours later Haines followed the others to Java. The planes staging through Bali made the trip without incident, apart from the fact that they directly passed over four Japanese destroyers that fortunately had no fighter cover. As the A-24’s did not carry bombs at that time, they decided to move on in a hurry. By three o’clock in the afternoon of the 12th all A-24’s had reached Pasirian. 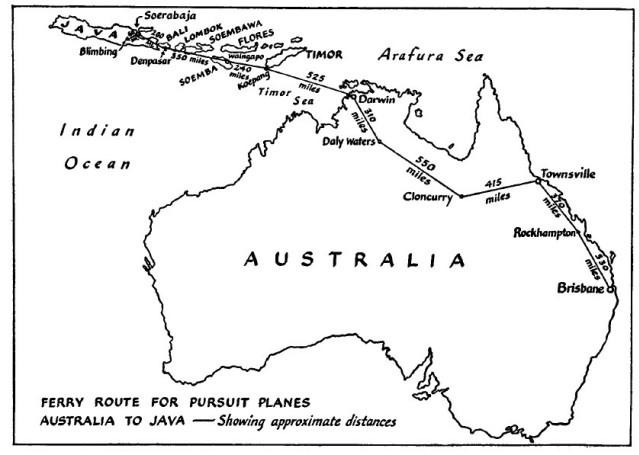 The ‘Brereton Route’ – now also followed by the A-24’s

The squadron transferred to Modjokerto (near Surabaya) that same afternoon. Modjokerto was an ‘emergency field’, hastily converted from rice paddies and some planes got stuck in its mud from which they could only be hauled by main force.
For four whole days, the squadron was able to carry out badly needed maintenance, for which only two qualified mechanics were available, while the crews luxuriated in their billets, usually with Dutch households. Two A-24’s were lost during this ‘rest’ period. Larrondes’s A-24 was cannibalized for parts to repair another A-24 that Abel had nosed over and bent its propeller. After it had been repaired, he made a test flight and discovered his wheels were stuck in the ‘up’ position. Nothing would dislodge them so he ditched his A-24 near the Surabaya Naval Dockyard and was rescued by the Dutch Navy. The squadron was now down to 9 A-24’s.
In the meantime ABDA Command scratched its head about what to do with a squadron of dive bombers that had suddenly been tossed in its lap. Neither the Dutch nor the British (nor the Americans by the way) had a battlefield doctrine in which dive-bombers fitted. The result was a rather senseless shuttling across Java of the whole squadron.
This started when Captain Ed Backus was summoned to ABDA Headquarters in Bandung (West-Java). He flew there on February 15th and on February 16th he summoned the whole squadron to join him at Tjililitan Airfield near Batavia (nowadays Jakarta). He greeted them wearing Major’s bars and handing a pair of Captains bars to Lt. Harry Galusha. After spending the night in Batavia – to which purpose is not clear but the crews did not mind – the squadron was sent back to East-Java. Galusha and four other pilots were told to make for the Pursuit Headquarters at Jombang (near Surabaya), while Backus was told to take the others to Malang, 50 miles to the south of Jombang. For once, the ex PanAm captain failed to reach his destination, due to a 30 foot ceiling over mountainous terrain and he diverted into the coastal strip at Pasirian.
February 18th saw all remaining planes assembled at Malang, HQ of the bomber force commanded by Col. Bill Eubank. Eubank ordered all planes gassed and bombed up, but by now, the spares and maintenance situation was so bad that two more A-24’s had to be cannibalized to keep the other 7 flying.

Coming up Next:
The 91st in Action!

Thank you for visiting my blog! The posts you find here are a direct result of my research into aviation and military history. I use the information I gather as a foundation and background for my books. You may call the genre historical fiction, a story woven into a background of solid and verifiable historical facts. However, the period and region I have chosen to write about (late 1930's - 1950's in South-East Asia) are jam-packed with interesting information and anecdotes. If I'd used them all I would swamp the stories. So this blog is the next best thing. It is an "overflow area" in which I can publish whatever I think will interest you. And from the reactions I get, I deduce I am on the right track. A lot will be about aviation in the former Dutch East Indies. This, because my series of books ("The Java Gold") follows a young Dutch pilot in his struggle to survive the Pacific War and its aftermath. But there's more in the world and you'll find descriptions of cities, naval operations and what not published on this blog. Something about myself; I am a Dutch-Canadian author, living in, and working out of the magical city of Amsterdam. My lifelong interest in history and aviation, especially WW2, has led me to write articles and books on these subjects. I hope you'll enjoy them!
View all posts by Kingsleyr →
This entry was posted in Aircraft, Indonesia, Pacific War, USAAF in Australia, USAAF Pacific and tagged 27th Bomb Group 1942, 27th Bomb Group in Australia, 27th Bomb Group in Java, 91st Bomb Squadron in Java, Captain Ed Backus, Douglas A-24, Douglas A-24 in Australia, Douglas A-24 in Java, Douglas SBD, Douglas SBD in Java, Lt. Bob Ruegg, Lt. Harry Galusha, USAAF in Java, USAAF on Malang. Bookmark the permalink.