Driving back from Luxembourg on a cold winters day, I passed through the Ardennes town of Bastogne and stopped at the (aptly named) “Place MacAuliffe” to have a look at the little statue and the Sherman tank next to it. I looked down the roads, radiating from that little town. And suddenly, on that cold and grey day with steadily falling snow, I got a feeling for what the battle for this town must have been. 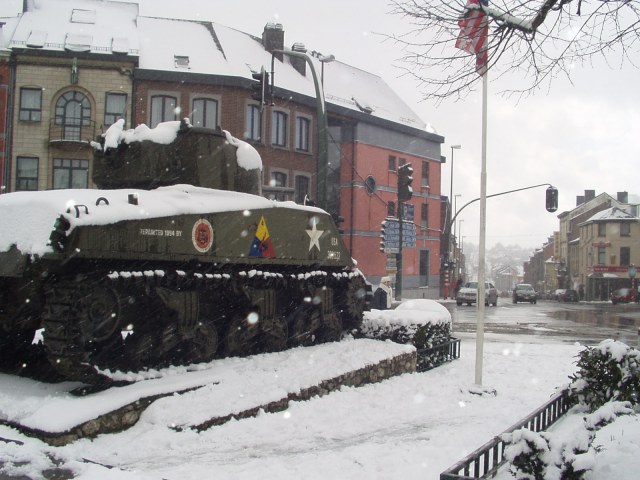 The siege started on December 20, 1944 when three German Panzer divisors, commanded by Heinrich Freiherr van Lüttwitz attacked the little crossroads town in order to establish control over the seven roads radiating from it.

The town was quickly surrounded by the German Panzer Divisions but moving in and taking it proved to be a hard job.
It was defended by elements of the 9th and 10th US Armoured Divisions, the 705th Tank Destroyer Battalion and the  “Screaming Eagles”, the US 101st. Airborne.

The US forces, hastily trucked in the day before,  were completely isolated. And the worst winter weather in memory made tactical air support or re-supply by air impossible.
And still, despite being outnumbered 5:1, without cold-weather gear or clothing, with little ammunition, even fewer medical supplies and almost no food , the US soldiers fought the attacking Germans to a standstill.

By December 22, the German commanding officer, General von Lüttwitz, decided to tell the Americans defending the town that it was time to stop. He sent this message:

To the U.S.A. Commander of the encircled town of Bastogne.
The fortune of war is changing. This time the U.S.A. forces in and near Bastogne have been encircled by strong German armored units. More German armored units have crossed the river Our near Ortheuville, have taken Marche and reached St. Hubert by passing through Hompre-Sibret-Tillet. Libramont is in German hands.
There is only one possibility to save the encircled U.S.A. troops from total annihilation: that is the honorable surrender of the encircled town. In order to think it over a term of two hours will be granted beginning with the presentation of this note.
If this proposal should be rejected one German Artillery Corps and six heavy A. A. Battalions are ready to annihilate the U.S.A. troops in and near Bastogne. The order for firing will be given immediately after this two hours term.
All the serious civilian losses caused by this artillery fire would not correspond with the well-known American humanity.
The German Commander.

A little later, McAuliffe sent his historic reply:
To the German commander
Nuts!
The American commander

This reply baffled the Germans until someone finally realized it meant “Go to hell!”
The battle for Bastogne raged on until December 26th, when elements of the 3rd US Army reached the encircled town. Instead of being relieved, the 101st was ordered on the offensive. During the next weeks they fought alongside other US units, facing elite German units such as the 1st SS Panzer division Leibstandarte Adolf Hitler. On January 17, after two weeks of heavy and tenacious fighting, the US troops had pushed the Germans back to the positions they had started from.

The 101st Airborne bore the brunt of the German onslaught and suffered 2.000+ casualties (out of 3.000+ for all Allied forces).
The Belgian population still honors the sacrifices made by the US soldiers, by monuments and even a special series of postage stamps, issued to commemorate the siege of Bastogne.

Thank you for visiting my blog! The posts you find here are a direct result of my research into aviation and military history. I use the information I gather as a foundation and background for my books. You may call the genre historical fiction, a story woven into a background of solid and verifiable historical facts. However, the period and region I have chosen to write about (late 1930's - 1950's in South-East Asia) are jam-packed with interesting information and anecdotes. If I'd used them all I would swamp the stories. So this blog is the next best thing. It is an "overflow area" in which I can publish whatever I think will interest you. And from the reactions I get, I deduce I am on the right track. A lot will be about aviation in the former Dutch East Indies. This, because my series of books ("The Java Gold") follows a young Dutch pilot in his struggle to survive the Pacific War and its aftermath. But there's more in the world and you'll find descriptions of cities, naval operations and what not published on this blog. Something about myself; I am a Dutch-Canadian author, living in, and working out of the magical city of Amsterdam. My lifelong interest in history and aviation, especially WW2, has led me to write articles and books on these subjects. I hope you'll enjoy them!
View all posts by Kingsleyr →
This entry was posted in Historical Background, WW2 Europe and tagged 101st Airborne, Ardennes offensive, Bastogne 1944, Battle for Bastogne, Battle of the Bulge, MacAuliffe, Screaming Eagles. Bookmark the permalink.